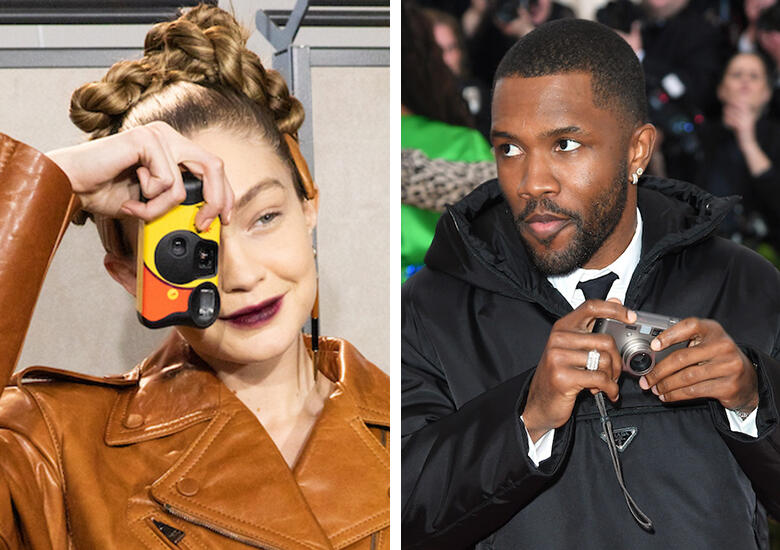 If you’re a model, singer, actor, or famous in any way, you’re used to living your life in the public eye. Cameras are everywhere, and always looking your best is sometimes part of your job. For those celebs that are constantly being photographed, practicing taking photos of their own can be a way of expressing themselves using skills they’ve learned along the way. Here are 10 celebrities that have taken to film photography, and aren’t half bad either!

Gigi Hadid took a liking to be behind the camera since she was a child. She had a website for selling prints of her photographs from the early age of 15. Her Instagram page that’s dedicated to her photography is cleverly called @gisposable, taking us behind the scenes of her hectic and exciting world.

Joe Jonas’ art account, @cupofjoe, consists of all kinds of photos from his travels. The Instagram might’ve started with phone pics but it’s also filled with point and shoot candids of friends, family, scenic views, and strangers. It’s proof that the star has a good eye as well as musical talent.

Kendall Jenner doesn’t have an Instagram for her film photography, but that doesn’t mean the model isn’t prepared to take disposable photos every now and then. She shot the cover of Love magazine on film with subjects like her sister Kylie Jenner and her model friend, Kaia Gerber. Here’s a picture she shot for Vogue during the 2018 Met Gala.

Frank Ocean is yet another creative to dabble with film photography. His Instagram features some photos taken on film since the nature of in-the-moment capturing is part of the way he expresses himself. Like Kendall, he’s taken photos at the Met Gala for Vogue in 2019.

Cole Sprouse, like most other celebrities his age, is soaking up all the glory of young adulthood and capturing it on camera. His Instagram page is a beautifully curated collection of different types of photos, some on film, some on phone, and others on high-quality digital. He also took a few snaps of friends at the Met Gala, for good measure.

Diana Silvers is a quirky and talented actress and model, bringing forward her interests with film photography. Her Instagram page, @dianasfilmdiary, focuses on soft lens images and beautiful landscapes, showing us another side to Diana.

Maude got her start as a young actress playing the daughter of her real mother, Leslie Mann, in movies like Knocked Up, This is 40, and Funny People, ones that her father, Judd Apatow directed. We know her more recently from Euphoria, and her Instagram page shows how her acting life blends with her personal life, captured in aesthetic film portraits.

Euphoria has pulled us into its grasp, bringing to the forefront some of our newest favorite actors. Jacob Elordi plays the infamous Nate Jacobs on the show but is a lot more tolerable in his real life. His film photography is displayed on his personal Instagram as well as on the show’s page, and it truly is artful.

This Succession star’s Instagram is fluttered with a delightful mix of professionally-shot photos, photos taken on a phone, and some taken on film. The black and white (and some color) images stand out in the feed as tasteful glimpses into the actor’s artistic life.

David Dobrik is a YouTube megastar, having gained his notoriety through the now-extinct social platform, Vine. He’s risen to the top of internet stardom through popular vlogs that have taken him beyond working strictly with YouTubers, into mainstream Hollywood. His film photography IG page, @davidsdisposable, features his friends, some young movie stars and, of course, Kylie Jenner.